Most printers on the market today only rely on firmware to protect against thermal runaway, but software is not good enough. To make matters worse a lot of cheap printers didn’t even enable these basic software protections, even though they are built into all popular firmwares. In the majority of cases firmware protection works well at protecting you. However, no firmware is going to protect you if it crashes or if you experience a controller board, and or temp sensor failure.

The F1 solution. That’s why the F1 incorporates redundant specialty electronic power cut-off circuits. These specialty circuits are completely independent from the firmware or other software controls. In other words, a bad transistor or crashed firmware is not going to prevent the specialty safety circuit from doing its job. The F1 also uses two temp sensors for added security. That’s right, two temp inputs, and each input is run through it’s own specialty circuit. If the circuit reads a temp higher than 325 C it will cut the power to your hot end. Please see the illustration below. 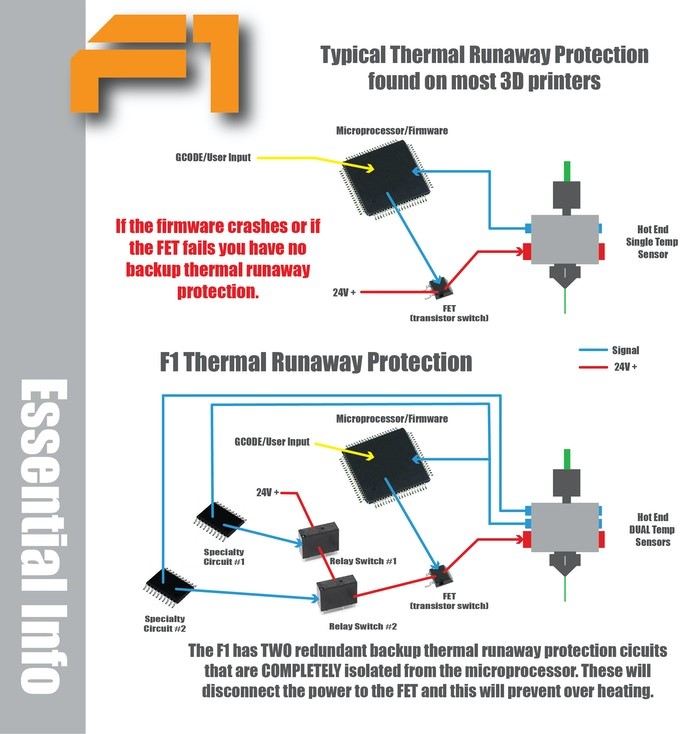 Better temp sensors, mounted better. The F1 uses PT100 temperature sensors made from Platinum, so they are extremely reliable. Furthermore, we designed our hot end to specifically prevent the temp sensors from dislodging during use. First, we use TWO temp sensors to add redundancy, as mentioned above. Second, we use multiple fastening points to retain the sensors. Third, our temp sensors are potted into metal cartridges, which allows us to attach them more securely. Finally, we engineered the cable management of the hot end wires to further prevent the sensors from coming loose.

Special hot end heat break and heat sink. We also use a special Bi-Metallic heat break sourced from Slice Engineering to keep the heat in the heater block instead of migrating upward into the rest of the hot end assembly. Not only does this improve the printing process, it makes the hot end safer overall. Finally, we designed our own heat sink to bleed off any excess heat that rises from the heat break.

The filament drive and hot end mount uses UL approved flame retardant materials for an extra level of safety. The hot end heat sink and heat break were designed to bleed off the heat before it can rise and damage the other components on the print head.

Insulated and guarded heater block. The stainless steel guard around the heater block helps reduce severe burning, keeps it cleaner, and better retains the heat. It still gets very hot, so be careful!

All connectors are genuine MOLEX brand, not some cheap offshore knockoff found on many 3D printers. Moreover, we selected connectors that are rated to carry double and triple the circuits rated current. If that wasn’t enough, we only use glow wire rated connector housings. This means that if you take a hot iron (the glow wire) and pushed it into the connector, the connector would just melt instead of catching on fire.

Special Z rod guards protect your hair and fingers from getting pinched or wrapped up. Each Z Axis lead screw gets its own guard. This also keeps the lead screws cleaner and reduces maintenance. It’s an extra level, we know, but necessary.

Advanced firmware. The F1 uses a modular firmware developed by STACKER and Repetier, and includes the standard thermal runaway protections found in other firmwares. It also includes a watchdog system that helps identify firmware crashes. If a crash is detected it resets the printer to help rectify the situation.